Even though we’re up north in Maine, we’ve still been monitoring tropical weather throughout this hurricane season. Earlier this fall, we detoured to Boston to allow Tropical Storm Leslie to clear out of the Northern Atlantic before we continued north to Maine. On Wednesday, one of the reasons we pulled into Boothbay Harbor was to find a good internet connection so that we could monitor what would become Hurricane Sandy.

Thursday morning I downloaded a grib that showed the eye of the storm passing just to the east of us up the Penobscot Bay on Halloween (spooky….) 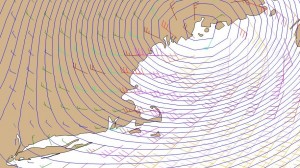 Luckily (for us) Friday morning I awoke to see that the forecasting models had shifted the storm to a more southerly landfall, but with more force. As of this morning, it looks like the eye will come ashore closer to New York. Unfortunately, this put our friends on the Chesapeake in harm’s way. (Not to mention all the people in the Bahamas who have already experienced the storm, or the others along the coast preparing for its landfall.) 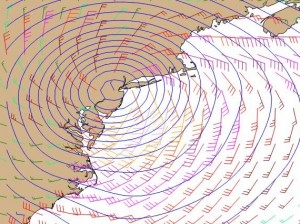 Yesterday we spent doing laundry, getting groceries, and preparing to be on our own for a few days.  On Friday, Coast Guard airplanes were radioing VHF storm warnings to boats well offshore. The VHF has been buzzing with notices to mariners over the last couple days, obviously the Coast Guard isn’t taking any chances with this late season storm.

Based on the proximity of this storm, we’ve picked out 3 possible anchorages where we feel we’ll be safest. (Our friend Jay provided a lot of knowledge from his time in Maine.) We’ve also calculated the time it will take us to get there, and we’ll be heading to one of those three later this morning once we fill up with water and diesel. After we find our secure anchorage we’ll be stowing items, removing Sabrina’s newly sewn bimini, and essentially “battening down the hatches.” We’ve tried to leave ourselves plenty of time tomorrow to deploy a second anchor, triple check our surroundings, and prepare for the worst.

We aren’t affected by power outages, or flooding, so our chief concern is the winds that this storm will bring ashore. We’ll be able to use the satellite phone to stay up on the latest info, but we won’t have the kind of access to info that we’ve enjoyed in Rockland and here in Boothbay.

On the bright side, we only have to make it till November 1st – that’s the official end to hurricane season! 🙂