Anyone closely following our Spot path yesterday probably thought we were lost. We weren’t lost, we were just searching for freshwater to fill our tanks, and apparently the best way to do that around here is to sail around until you see a water hose on a dock…. Rhode Island has plenty of free pumpout stations to help reduce pollution, major harbors even have a free pump-out boat that will pull up to your dock, but unfortunately, they don’t have water hoses at some of those docks.

We thought we could fill up with water in Dutch Island Harbor, there was a free town supported pump-out, but the water was on another dock and only for guests on the marina’s moorings.  (Cost for a mooring? $50. Yeah, we looked elsewhere.) In Bristol they have a town dock, but no water hose, so eventually we ended up heading to New England Boatworks in Melville, RI. The interesting thing about the Narragansett is that most boats ride on moorings for the short season. Marina slips are pretty rare, and therefore pretty pricey. So when we pulled into NEB I saw what I expected – huge, very expensive yachts.

Large boats wouldn’t be a problem, except for the fact that the fuel/water/pumpout dock is at the very south end of the marina. Here’s a photo of where we headed via our Spot track: 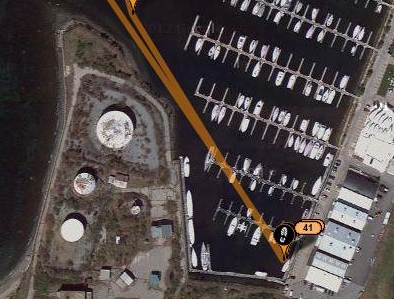 This aerial photo is a little deceiving because it was taken in the winter. Each one of those T-heads had a huge 60′-75′ sailboat on them. The fairway to the fuel dock was very constricted, with no place to turn around. To make it worse we followed in a 60′ trawler that was also heading to the fuel dock, and I had no clue if there would still be room for us. Luckily we made it in without incident, and we were able to get a pump-out and fill our freshwater tanks.

The dock girl was very friendly and helpful and NEB is obviously a very nice marina, but as I narrowly passed multi-million dollar yachts I started to wonder about the liability limits on our insurance…. A long hot fresh water shower later that evening helped me forget about the stress of the day.