…and a Happy Memorial Day to all of you in the States!

Since we are celebrating Whit Monday, you can deduce that we are still in the Bahamas.

Last week we knew the weather was uncertain. On Thursday storms swept through this area, bringing some 40 knot winds, and a water spout that swept through Great Guana Cay. But,we didn’t really expect the SECOND NAMED STORM OF THE YEAR. And we really didn’t expect two named storms before June 1st for ONLY THE THIRD TIME IN RECORDED HISTORY!

Tropical Storm Alberto didn’t really affect us much (and it wasn’t much to look at.) Beryl on the other hand has thrown a little wrench into our plans. I made this handy diagram to show the weather forecast I received on Saturday: 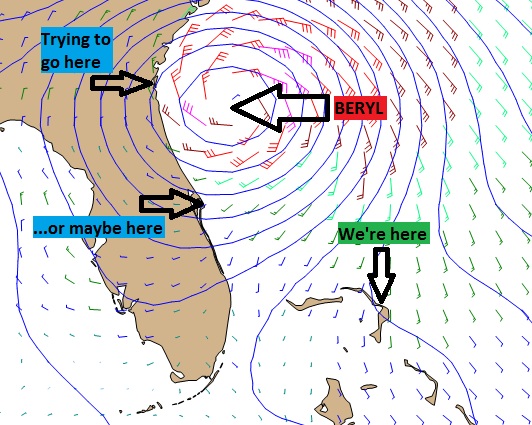 Basically, Beryl decided to head to Fernandina Beach, and arrived a few days before we were trying to get there.

Now it could be worse, we could already be in Fernandina, readying for Beryl’s landfall. Or even worse we could be out at sea getting hammered by 40 knot winds and huge waves. So, all in all, we’re pretty happy to be in the Abacos. We just want to get home so we can start our summer cruise north to Maine.

The next few days look promising to cross once Beryl moves to the northeast, and once we get across we’ll be sailing north as fast as we can. It’s very hot down here, and I’m looking forward to cooler weather the further north we go. Come to think of it, I’m also looking forward to a draft beer and hot wings, but that’s another issue.

[Side note: After 4 weeks of absolutely no luck with the satellite phone, for some reason it started working a few days ago.  I don’t know how long it will last, but we’ll try to get a post up right before we depart to head home.]